For those of you who are not interested in politics, and apparently thats statistically everbody, the Irish "No" to the EU Lisbon treaty is the gretest disaster in recent years. Whats even more troubling than the fact that 860.000 Irish can endanger the future of 450 million Europeans, is the agenda of the EU opponents: there is none. 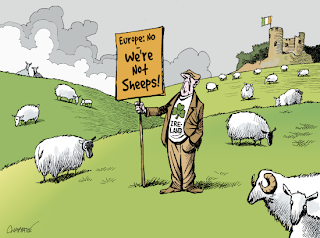 The most cited reason to vote "NO" is that the treaty was "too complicated" and people didn't know what is was all about. Instead of getting some information on an existential question and do some thinking on whats best for them, they just grabbed the feel-good factor of creating a mess for their political establishment. There are two words for this: "stupid" and "lazy". What's really freaking me out is that I am afraid this attitude prevails in most parts of our populations.
Eingestellt von MS um 10:07

Well .... that's one way to look at it. Another might be that proponents of the treaty made the same mistake they made in 2005, which was not helping voters understand why it mattered. There's a kind of inherent arrogance in this approach that fails to take into consideration the very real fear some have with respect to the EU.

I was at a meeting given by some European organization in DC in 2005 just after the resounding "NO" vote, and this point was made several times. I think the burden clearly rests with EU to make a clear case for the treaty and not on voters to have to sort through that madness to find the relevance to their everyday lives. This is particularly true, as you so rightly state, that no one is interested in politics these days.

True. Obviously, the ball is in the corner of policy makers. However, democracy rests on the idea of citizens who take part on the polity. If there is no more attempt to engage in more complex, but essential questions, democracy is in big trouble.